Data were collected by Colin Bergeron (Bergeron et al. 2011, 2012). Dataset has been published in Dryad data repository as supplement to Blanchet et al. (2014), and is also included in the R library ordiconsensus. 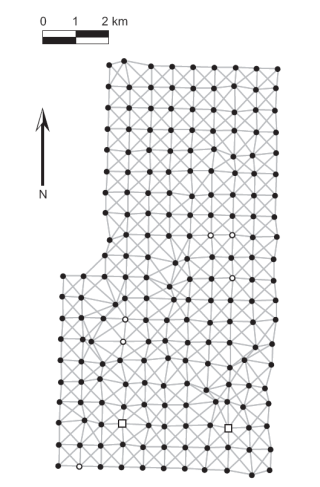 Data about species composition of carabid beetles and surrounding vegetation structure. In the summer of 2002, 194 sites distributed on a near-regular grid were established in an area of 70 km2 (Fig. 1). Each site was positioned in never-harvested mature forests, a minimum of 40 m away from any anthropogenic disturbance or major water bodies. On average, sites were 700 m apart, with a minimum distance between any two sites of 260 m. (Description according to Blanchet et al. 2013.)

EMEND study site located in northwestern Alberta, Canada (56°46′13″N, 118°22′28″W) on the southeast slopes of the Clear Hills formation. The site is dominated by boreal mixedwood forest. (Description according to Blanchet et al. 2013.)

Script for direct import of data to R

Alternatively, install the library ordiconsensus from R-Forge.org website, written by F.G.Blanchet. Data can be found in data (beetle) and data (beetle.expl).