Two datasets are provided here. The dataset gentry197 is composed of forest inventories in 197 localities distributed around the globe (from 40.7°S to 60.6°N and from 127.8°W to 166.8°E); at each locality, 10 transects 0.01 h (2 m x 50 m) each were sampled, and all woody individuals (including lianas) with DBH (diameter at breast height) larger than 2.5 cm were measured and counted. The dataset gentry.ea is a subset of the previous one, with five localities from East and South-East Asia. 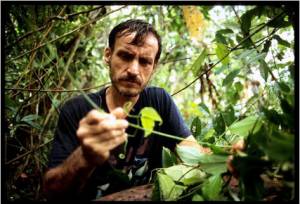 After Gentry's tragic death (in a flight accident on the way to Ecuador), the dataset was made available on the website mentioned above and also published in printed version (Phillips & Miller 2002).

Data from 225 forest plots are available on http://www.wlbcenter.org/gentry_data.htm. I prepared them for use in R (check this script if you want to know how). From the total of 225 plots, I removed those made by a different method (or containing less than ten transects), arriving at the number of 197 plots used for further analysis. Data contain many errors, which call for a manual treatment - I haven't attempted to do it for the purpose of this exercise 2). The dataset of 197 localities prepared for use in R is available below. The subset of five localities from East and South-East Asia is also available.

Highest concentration of localities are in South and North America, however, Gentry has other localities scattered around the globe (link for coordinates is here).

Distribution of 197 localities around the World (used in this dataset): 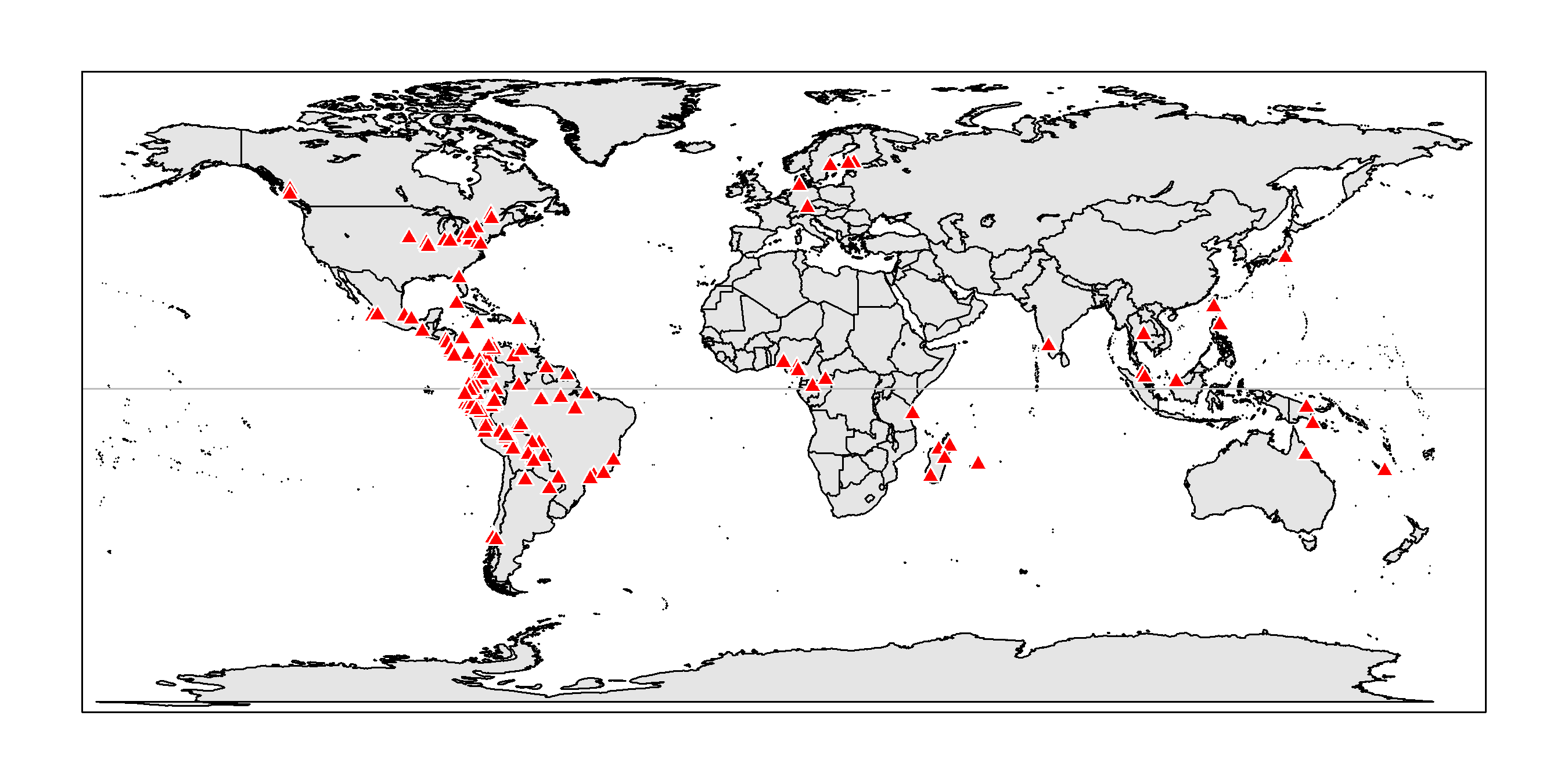 Distribution of five localities in East and South-east Asia (note that the two localities in Taiwan, Kending and Nanjenshan, are so close to each other that on the map they appear as one symbol): 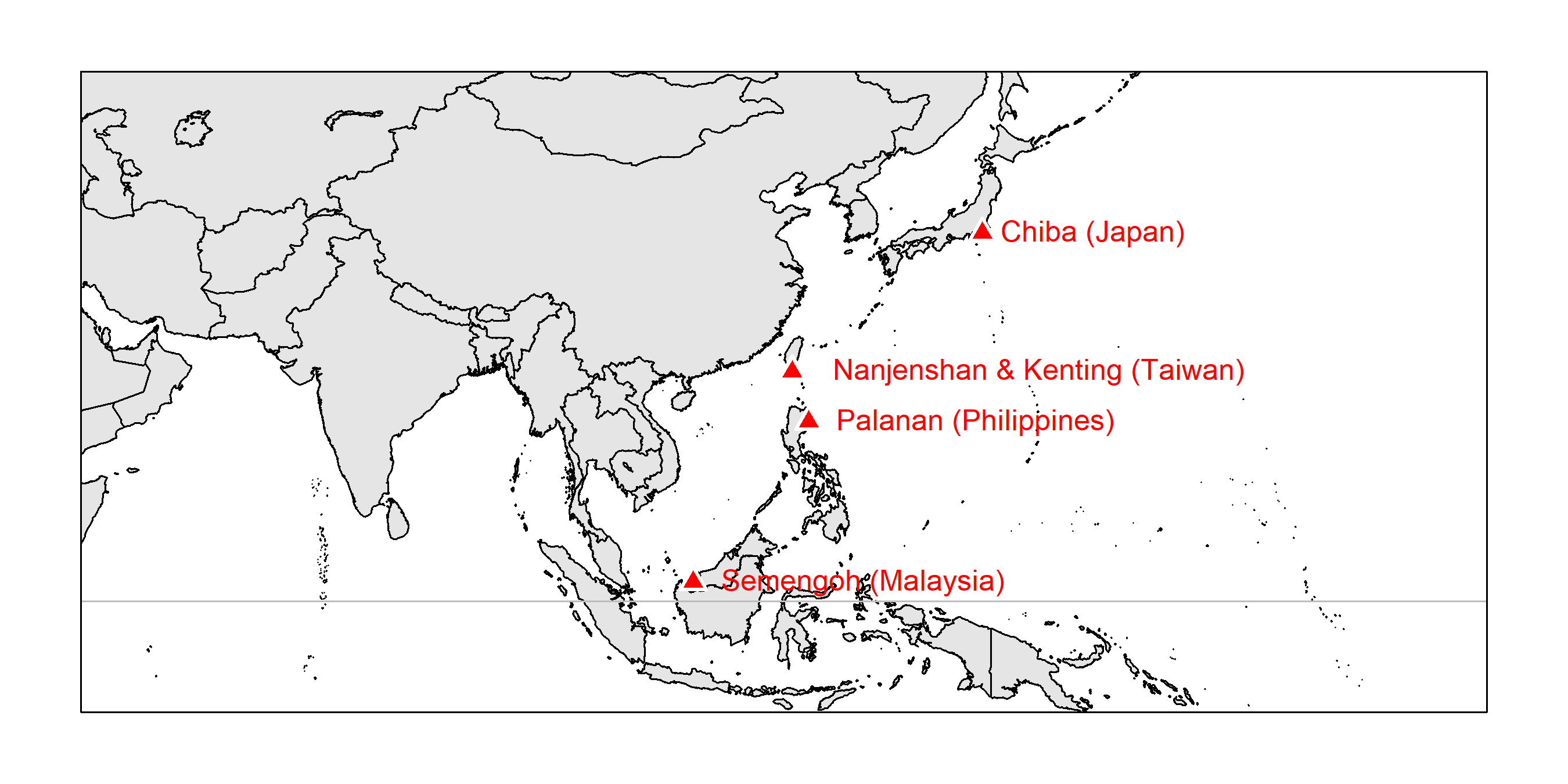 This table have been manually retyped into electronic form, available here as data frame gentry.coord.txt, with the following variables:

Script for direct import of data into R

Upload the subset of five plots in East and South-East Asia:

The script loads an R object gentry197.RData in case of the whole dataset and gentry.ea.RData in case of asian subset into R; it will appear in the working space as a list gentry197 with 197 components or gentry.ea with five components, respectively. Each component represents data from one locality (composed of 10 transects). The preview of the data frame from the first locality in gentry197 looks like this (each row = transects, only 5 columns = species) :

1)
See this description by Boyle (1996) for more details.
2)
e.g. file SANSEBAS.XLS contains one empty column inserted among Lines and Family, which needs to be removed from *.xls file prior to application of the script. There are several such problems, and you need to follow error messages if trying to extract data by yourself.
3)
For the locality sierraro (Cuba), the latitude reported in the original table was fixed - it should be 22.83 N, not 22.83 S.
4)
If the original table reported a range of the values, here is reported the mean elevation.
en/data/gentry.txt · Last modified: 2021/12/24 16:23 by David Zelený