Constrained ordination includes multivariate regression analysis, and as in ordinary least squared regression, the effect size is measured by R2, the coefficient of determination. R2 quantifies the variation in species composition explained by a linear model of the environmental variable(s), and can be calculated (if no covariables are included) from the analysis output as the sum of eigenvalues of constrained axes divided by the total variation (sum of all eigenvalues). The value of R2 in constrained ordination suffers from the same drawback as in ordinary regression, namely that it increases with the number of explanatory variables and decreases with the number of samples in the dataset, making the values incomparable between analyses done on different datasets. The solution is to use adjusted R2. The value of explained variation itself is not too informative unless it is compared with the variation the same number of explanatory variables could possibly explain (which is usually far from 100%). Also, even if the explanatory variables are in fact randomly generated, the R2 is non-zero and positive (in contrast to adjusted R2, which may be zero or even negative), and to decide whether the results are interpretable, it is useful to test their significance by Monte Carlo permutation test.

The solution to this problem is to calculate adjusted R2. For linear ordination methods (as well for ordinary least squared multiple regression) the adjusted R2 can be calculated using Ezekiel’s formula: 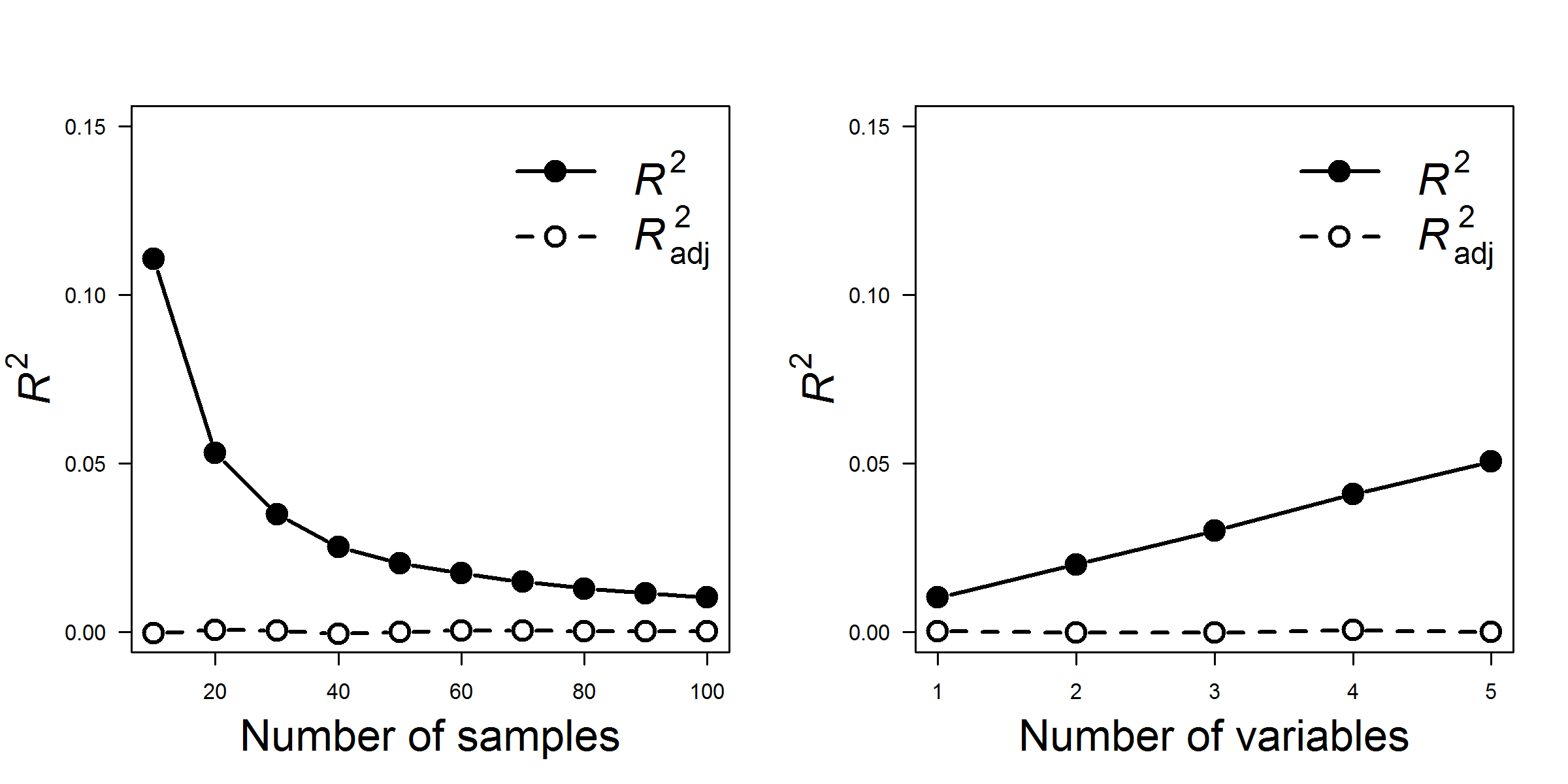 Figure 1: Comparison of variance explained in constrained ordination expressed by R2 and adjusted R2. The community data with one strong gradient were simulated using the library (simcom), with an increasing number of samples. The explanatory variables are randomly generated. R2 decreases with the number of samples in the dataset (left figure) and increases with the number of explanatory variables (although these are just randomly generated). Adjusted R2 is not influenced by these two dataset parameters.

In the case of unimodal ordination methods, however, the values returned by Ezekiel’s formula are overestimated (and the dependence of variation on the number of samples and/or explanatory variables is not removed), and the R2 needs to be adjusted using the permutational method proposed by Peres-Neto et al. (2006). The principle of this permutation adjustment is based on using modified Ezekiel's formula to compare observed variation explained by the variables (R2) with expected (mean) variation the same number of variables would explain if they are random (

, Fig. 2). Adjusted R2 calculated by the permutation method will slightly differ among calculations (these differences will be rather small if the number of permutations is set to be high). 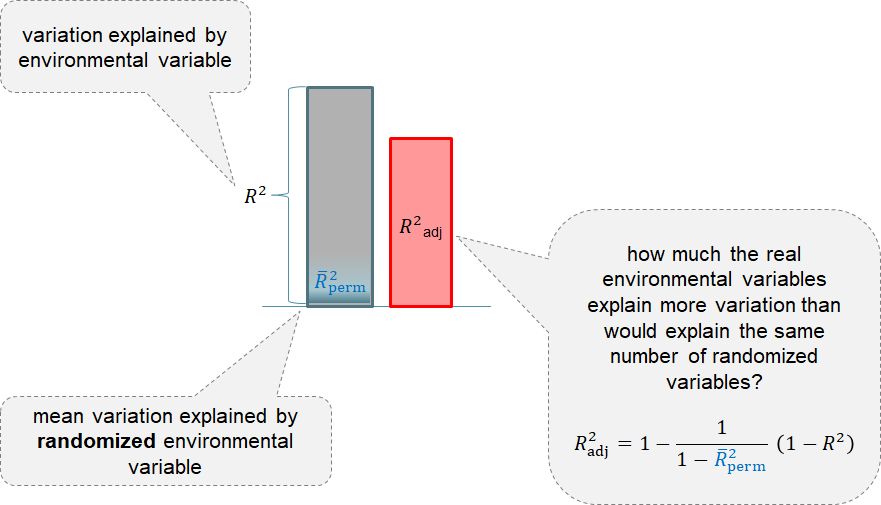 In contrast to R2, the values of adjusted R2 can reach zero, which means that the explanatory variables do not explain any variation in species composition, or they can be even negative, which means that explanatory variables explain even less variation than would be explained (in average) by the same number of randomly generated ones. The negative values are usually ignored and not interpreted (this is important e.g. when interpreting fractions in variation partitioning).

Is the value of explained variation too low?

The variation explained by constrained ordination may often seem as too low in the absolute terms. For example, in Example 1 in this section, the variation in species composition of vltava dataset explained by two explanatory variables, soil pH and soil depth, is less than 9%. Are the results of the analysis explaining less than 9% of variation worth to interpret/think of/publish?

To correctly interpret the value of explained variation, you need to consider that in the case of multivariate linear regression (which constrained ordination is), two explanatory variables will be unable to explain 100% of the overall variation. In fact, the amount of variation explainable by a given number of explanatory variables in the case of the certain dataset can be exactly calculated, if we assume that the best explanatory variable for that dataset is represented by sample scores on the ordination axes calculated by an unconstrained variant of the ordination on the same dataset. For example (Fig. 3), if we take one explanatory variable, and we want to know how much it could maximally explain in the constrained ordination analysis done on given dataset (soil pH used as explanatory in tb-RDA on log and Hellinger transformed species composition data from vltava dataset, explaining 4.8% of variation), we can do the following: 1) calculate unconstrained variant of given ordination method (here tb-PCA) on the same species composition dataset (with the same transformation of raw data if applicable), and 2) check the variation represented by the first ordination axis (calculated by dividing the eigenvalue of this axis by total variation in the dataset). This value (13.1% in our example) is the maximum variation any one predictor can explain in a given dataset. In our example, pH explained 4.8% of total variation, while it could maximally explain 13.1% - in fact, it explained more than third of what it could explain (4.8/13.1= 36.6%). This is not too bad. 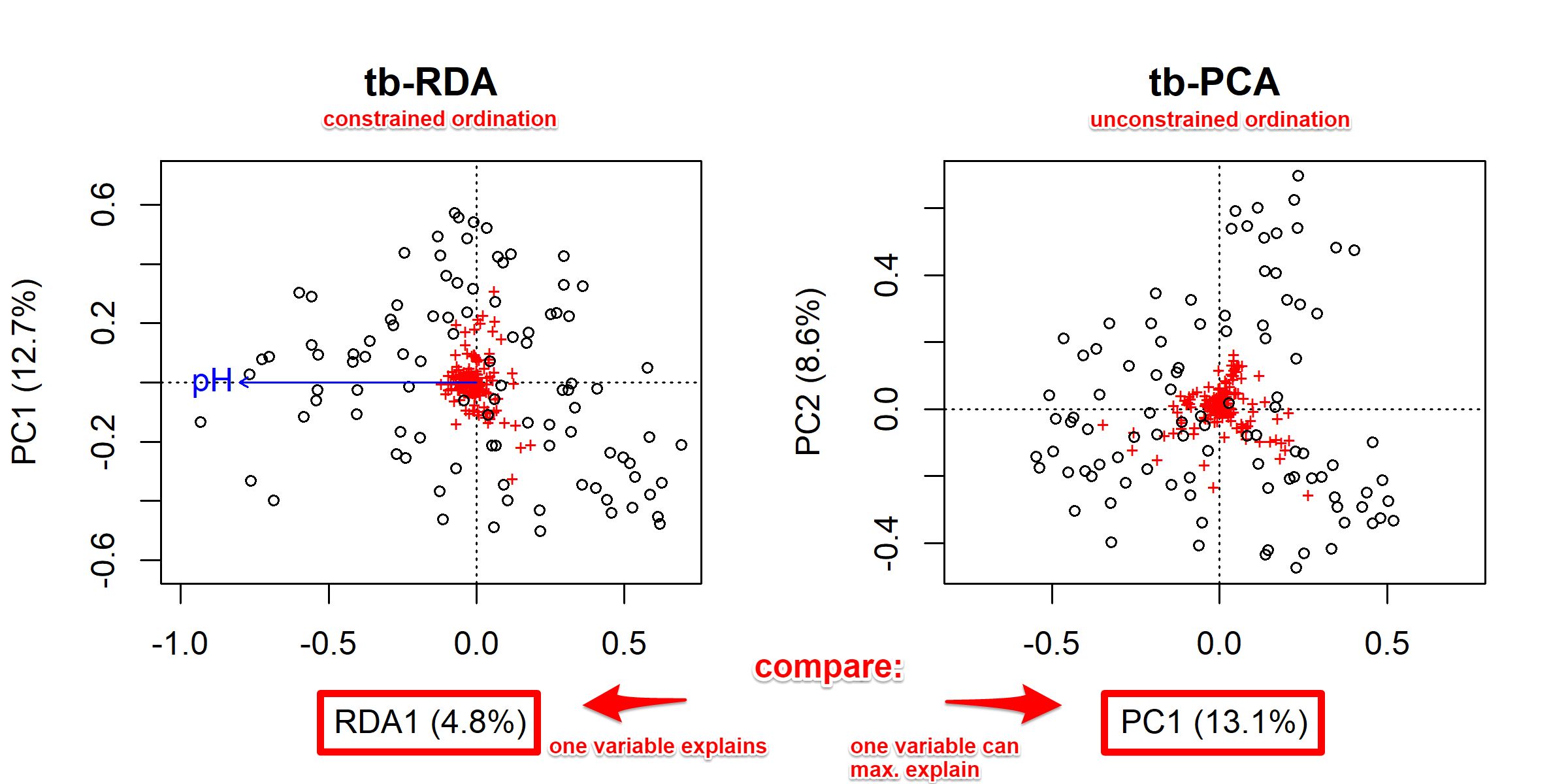 where nx is the number of permutations where the expected value of the test statistic is higher than observed value (Fperm > Fdata), and N is the number of all permutations. The formula also explains why the numbers of permutations are usually set to end with 9 (e.g. 499 instead of 500): the observed value of the test statistic is considered to be also the part of the null distribution, and is therefore added together with expected values (and the number one is added to the formula). The lowest P-value you can reach depends on the number of all permutations (N) and can be calculated as Pmin = 1/(N+1). For example, with N = 199 permutations, the lowest P-value which can be obtained is 1/(199+1) = 0.005, and one cannot, therefore, hope to reject the null hypothesis at P < 0.001. Especially if the multiple testing correction is applied (e.g. in the case of forward selection or testing several constrained axes), it may be necessary to increase the number of permutations into a quite high value to make sure that the minimum P-value after adjustment will be lower than the selected significance threshold (example: with 499 permutations, Pmin = 1/(499-1) = 0.002; if we are conducting 10 tests (e.g. because we do forward selection from 10 explanatory variables in constrained ordination) and we apply Bonferroni correction, each P-value gets multiplied by 10, and the minimum achievable P value after adjustment is Pmin-adj = 1/(499-1)*n_tests = 0.02; we may need to increase the number of permutations to be able to reject the null hypothesis at lower P-values). 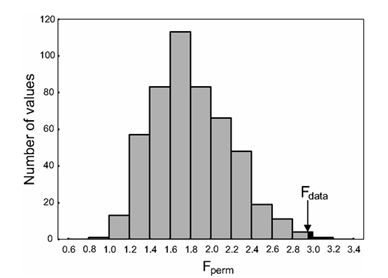 Figure 4: Observed value of the pseudo-F value (Fdata) compared with the null distribution of expected values (Fperm). From Šmilauer & Lepš (2014).