Variable selection is a procedure for selecting a subset of explanatory variables from the set of all variables available for constrained ordination (RDA, CCA, db-RDA). The goal is to reduce the number of explanatory variables entering the analysis while keeping the variation explained by them to the maximum. Variable selection is suitable mostly in case of observational studies, where many (often highly intercorrelated) environmental variables are recorded, to reduce their number (and to simplify the story); it is usually not useful for experimental studies with the balanced design of treatment application.

The standard method is forward selection, which is adding explanatory variables one by one; backward selection, in contrary, starts from the full model (with all variables) and deletes variables which the least decreases the total explained variation. Combination of both approaches is stepwise (forward-backward) selection, in which in every step the analysis checks whether some of the already included variables cannot be removed to improve the model.

The simplified sequence of steps in the case of forward selection is the following:

The significance of the variables (step 7 above) is one of the possible stopping rules (once the best remaining variable is not significant, the selection is stopped). Alternative stopping rule is reaching the adjusted R2 of the global model (Blanchet et al. 2008): first, calculate adjusted variation explained by all explanatory variables (global model); if during the forward selection the adjusted variation explained by selected variables reaches the R2adj of the global model (with some given precision threshold), the selection will be stopped (available in function ordiR2step in library (vegan) and forward.sel in library (adespatial)).

To reduce the risk of Type I error due to conducting a set of tests of significance during the forward selection, resulting P-values may need to be adjusted, e.g. by Holm or FDR correction, and only variables significant at given alpha should be considered.

In the Example 1 with the chemical variables measured in fen water and their relationship to the species composition of Carpathian wetlands, forward selection chose a subset of five variables (after adjusting the P-values with Holm's correction):

The table is a simplified output of the function forward.sel (or similarly also ordiR2step). It contains the variables in the order as they were selected during the forward selection; R2 is the partial variation the variables explains (i.e. variation the variable explains after accounting all previously selected variables as covariables); Cum R2 and Cum R2adj are cumulative variance (not-adjusted and adjusted R2) explained by given variable together with all previously selected variables. F-value is the pseudo-F of given variable, and P-value is the original P-value which was used to decide whether the variable should be selected; P-value (Holm) is the P-value adjusted for multiple testing issue by Holm's correction (adjusting for all potential tests which may have been done, i.e. for the number of all variables from which the selection is done - 14 in this case; P < 0.05 are displayed in bold). The number of permutations in the test of significance was set very high (49,999), meaning that the lowest P-value is 1/(49,999+1) = 0.00002, and even after the Holm's correction, this P-value is 0.00028, i.e. well below 0.001. Results show that five variables (Ca, conductivity, Si, NH3 and NO3) were selected, together explaining R2adj = 18.5% (compared to 20.1% explained by global model with 14 variables). Comparison of tb-RDA ordination diagram of global model and model with forward-selected variables is on Fig. 1. 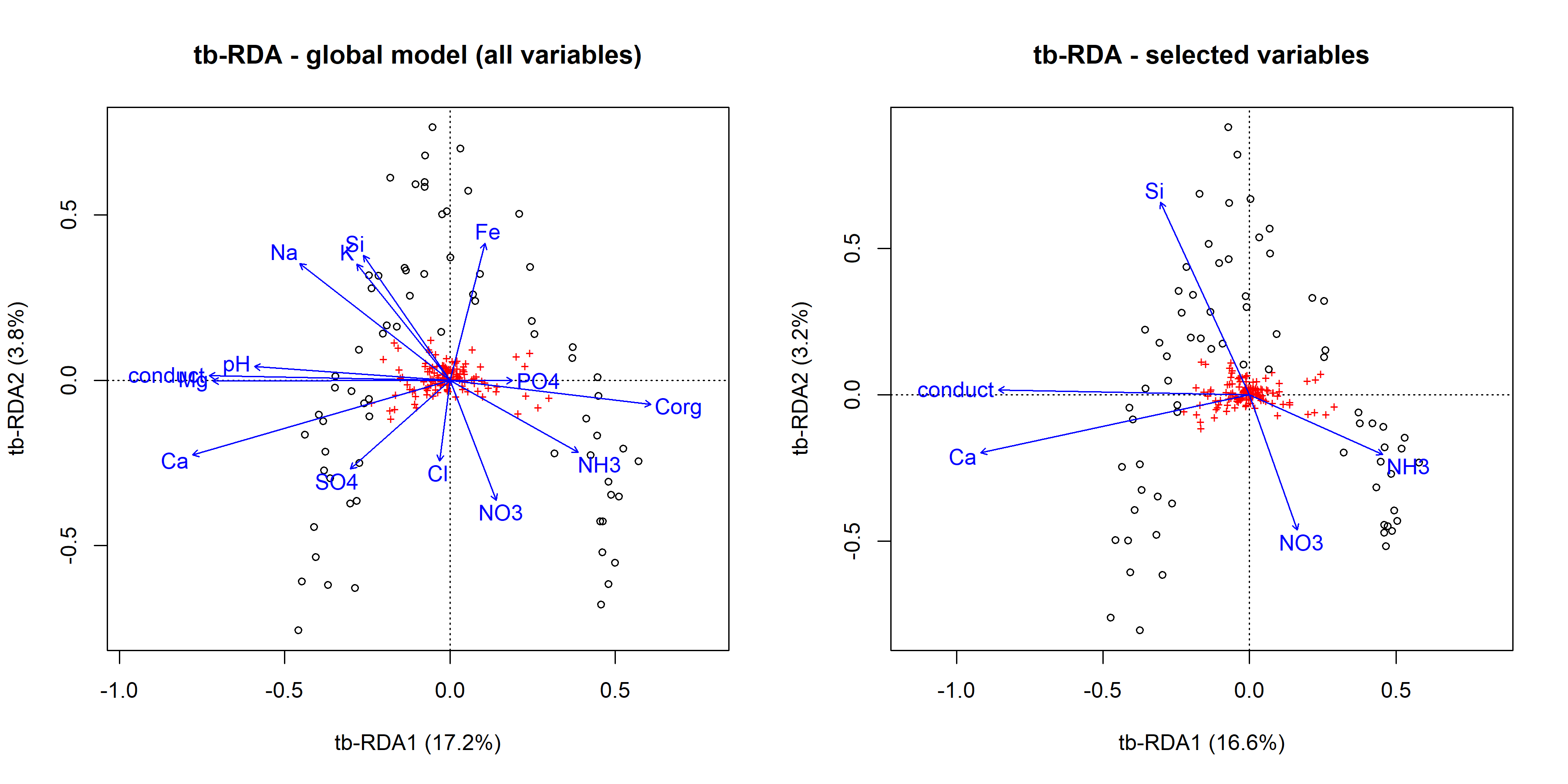