The method is illustrated on a simple example of tb-PCA, unconstrained linear ordination method (principal component analysis applied on Hellinger-transformed species composition data). It consists of the following steps: 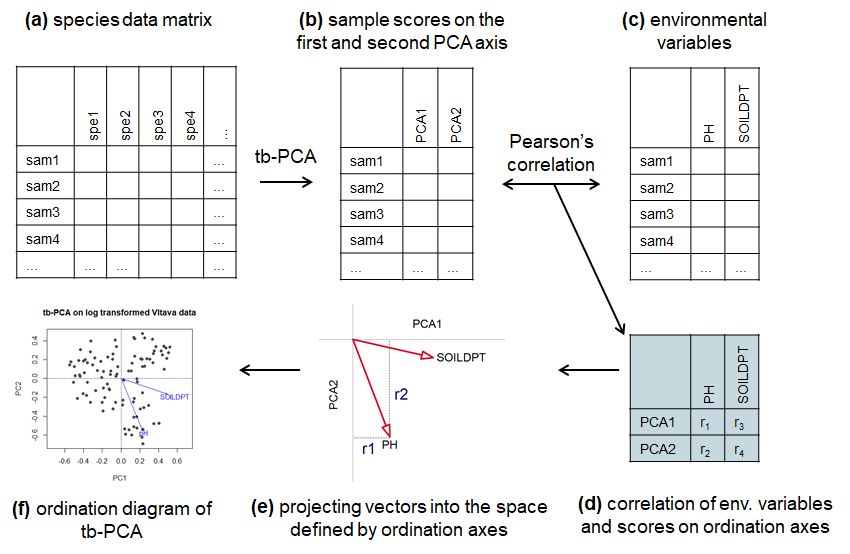 Some more technical details. Before the analysis, both dependent and explanatory variables are each centered (to have zero mean), but not standardized; in case of unimodal ordination, the weights are calculated as row sums of species abundances in each sample, and these weights are used for the centering of all variables included in the multiple regression. Calculated b0 (intercept) is zero, because all variables are centred. The regression coefficients b1 and b2 need to be normalized, so as their sum of squares equals to one. The normalized values c2 and c2, respectively, can be calculated as

, where k is the scaling factor, k = 1/sqrt (b1^2 + b1^2)). The c1 and c2 are called cosines, and if multiplied by squarerooted r2 from the above multiple regression, they are equal to r1 and r2 calculated using Pearson’s correlation above (but only in case of linear regression without using weights, as mentioned above).

The results in the case of the two environmental variables from the example above are summarised in Tab. 1 (output of vegan::envfit function). The values in the columns PC1 and PC2 are not correlation coefficients, but cosines (see above; the sum of their squares equals to one). The column r2 contains the coefficient of determination for (weighted) multiple regression for each environmental variable; the higher is this values, the more important is the environmental variable to explain variation in the given number of ordination axes. The Pr column is the result of the Monte Carlo permutation test; it is perhaps better to use only significant variables for interpretation and plotting of the ordination diagram. Note that since the test is permutational, the minimum P-value depends on the number of permutations used, following the relationship Pmin=1/(number_of_permutations + 1).

Why to test the relationship of supplementary variables to ordination axes?

Even if the supplementary variables are just a set of random variables, if projected onto the ordination diagram, they may appear as good to interpret (Fig. 2). The absolute length of the variable vector is dependent on the r2 (in case of using multiple regression), and variables with higher r2 have a longer vector. However, when projected onto the ordination diagram, the lengths of the vectors are rescaled relatively to the length of the variable with the highest r2. If all variables are random, they still have non-zero r2 (although quite low), and some will have higher r2 than the others - this variable will appear with the longest vector, and all others will be scaled relative to it. This is why it is important to check the table of regression results. The absolute values of r2 are difficult to interpret since they are influenced by the number of samples in the analysis (r2 decreases with the increasing number of samples). This is why the statistical test can help, helping to figure out which variables have r2 high enough to use for interpretation. 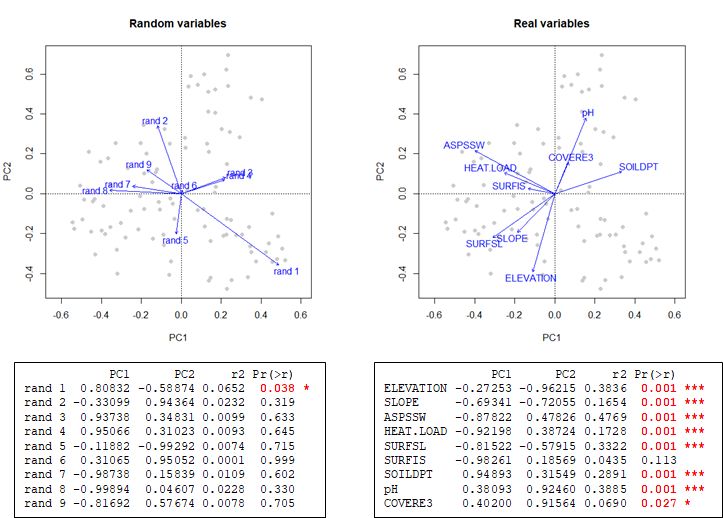 Figure 2: Nine randomly generated (left panel) and real (right panel) supplementary variables projected onto the ordination diagram. The results of multiple regression with the Monte Carlo permutation test are provided below. If we do not inspect the numeric results, we may be tempted to interpret the variables in the ordination diagram even if they are in fact random numbers. The tables show that, indeed, in case of the random variables all (but one) variables are insignificant, and r<sup

To test the significance of the relationship between a supplementary variable and ordination axes does not make sense in case that supplementary variables are in some way derived from the same species composition matrix as used in the ordination itself. This is e.g. the case when supplementary variables are species richness/diversity, or community weighted means (CWM) of species traits, Ellenberg-type indicator values or other species attributes. Since the null hypothesis tested is “there is no relationship between supplementary variable and samples scores on ordination axes”, it is easy to reject at the moment when these are in fact derived from the same information (species composition matrix). The solution is not to test the significance, or, in the case of CWM, use the modified permutation test based on permuting species attributes (see more in Zelený & Schaffers 2012 and Zelený 2018, and use the function envfit_cwm available in weimea package if you wish to apply the modified permutation test).

The more tests of significance we are doing, the higher is the chance to observe the significant result, even if the null hypothesis is true (no relationship). This rule is called multiple testing issue and can be illustrated in a simple example. I generated two random variables with normal distribution, calculated their regression, and tested it (using parametric F-test). One would expect that the test will not return a significant result since the variables are generated randomly. But if I repeat this 100 times (Fig. 3), you can see that some of the results turn to be significant. The proportion of significant results depends on the threshold value you use to deem result significant; e.g., if you consider as significant results with P-value lower than 5% (alpha = 0.05), then about 5% of the tests may appear as significant even though the variables are random (Type I error). Or, put in another way, the probability that at least one of the tests will be significant at P < alpha can be calculated 1 - (1 - m)alpha, which is called family-wise Type I error rate - the probability we are conducting Type I error rate if we interpret the results of multiple tests without any correction. 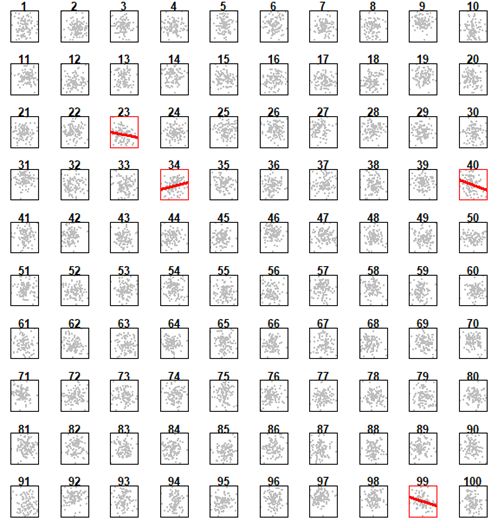 Figure 3: Multiple testing issue. I generated two random variables (normally distributed) and tested the significance of their regression with parametric F-test. I replicated this 100 times, each with newly generated random variables. Significant regressions (P < 0.05) are displayed with a red regression line. From a total of 100 analyses, four are significant at the level of 0.05 (almost 5% of all analyses).

The solution is to either avoid doing multiple tests or apply some of the corrections methods. Perhaps the best known is Bonferroni correction, which is however also very conservative (you simply multiply the resulting P-values by the overall number of tests m you did in the analysis, Padj = P * m) and becomes detrimental in case that the number of tests is high since it reduces the power of the test. Less conservative are Holm or false discovery rate (FDR) corrections. More about multiple testing issue can be found in my blog post and also in the book Statistics Done Wrong by Alex Reinhart, chapter The p value and the base rate fallacy.

In the case of example above using nine random and real supplementary variables and relating them to unconstrained ordination axes, if we apply the multiple testing correction (here Bonferroni, Fig. 4), all results in the case of random variables become insignificant (in case of the real variables, one more result become insignificant compared to the not-corrected results). Since in this case, the test is permutational and the minimal P-value depends on the number of permutations, in case that there are many supplementary variables (and many tests), it may be necessary to increase the number of permutations to decrease the minimum P-value which can be calculated. For example, if the number of permutations is set to 199 (e.g. due to the calculation time), the minimum P-value which can be reached is Pmin = 1/(199+1) = 0.005; if there are ten variables and the correction for multiple testing is done by Bonferroni (P-value * number of tests), the best resulting corrected P-value would be 0.005*10 = 0.05, which means that we would be unable to reject the null hypothesis on P < 0.05. 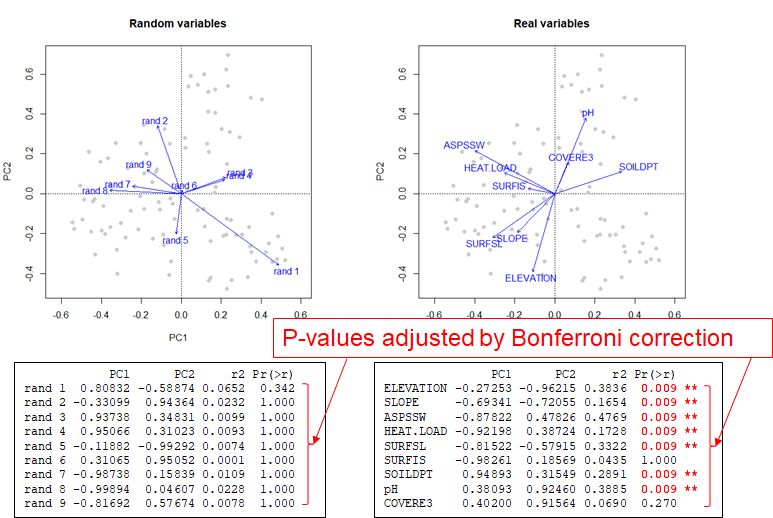