Calculate linear regression, test it and plot it

Data we will use here are in the dataset cars, with two variables, dist (the distance the car is driving after driver pressed the break) and speed (the speed of the car at the moment when the break was pressed). 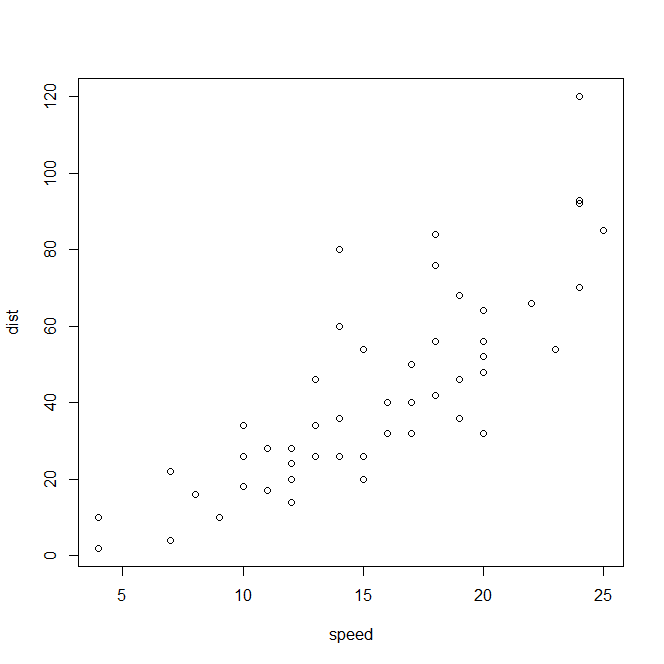 To calculate linear regression model, we use the function lm (linear model), which uses the same formula interface as the plot function:

The function 'lm' returns estimated regression coefficients, namely intercept and slope of the regression. Using these coefficients, we can create equation to calculate fitted values:

We can argue that the intercept coefficient does not make practical sense (at zero speed, the braking distance is obviously zero, not -17.6 feet), but let's ignore this annoying detail now and let's focus on other statistical details. We can apply generic function summary on the object which stores the linear model results, to get further numbers: 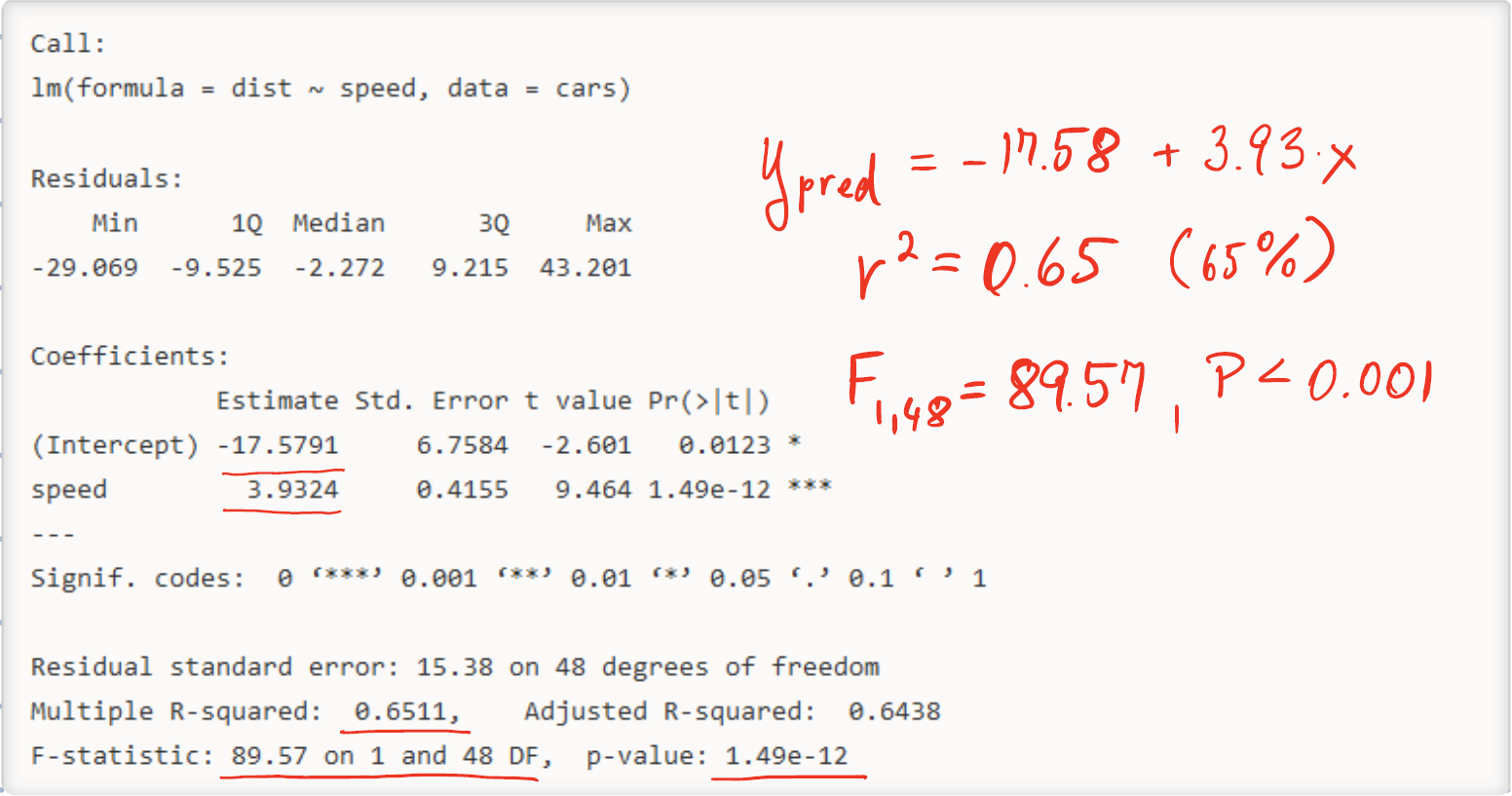 Commented output reports the most important variables: apart to the regression coefficients also the coefficient of determination (r2), and the value of F statistic and P-value. These are usually numbers you need to include when you are reporting the results of the regression. Some details below:

Finally, we can plot the regression line onto the plot. The simplest way to do it is using the function abline, which can directly use the variables from the lm object. You may know that function abline has arguments v and h for coordinates of vertical and horizontal line, respectively, but it has also arguments a and b for regression coefficients (intercept and slope, respectively). It can extract these values directly from the result result of lm function: 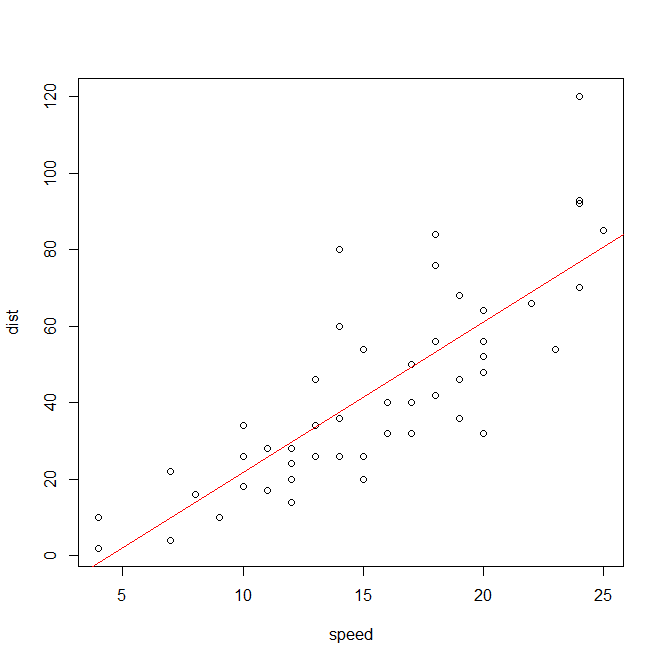 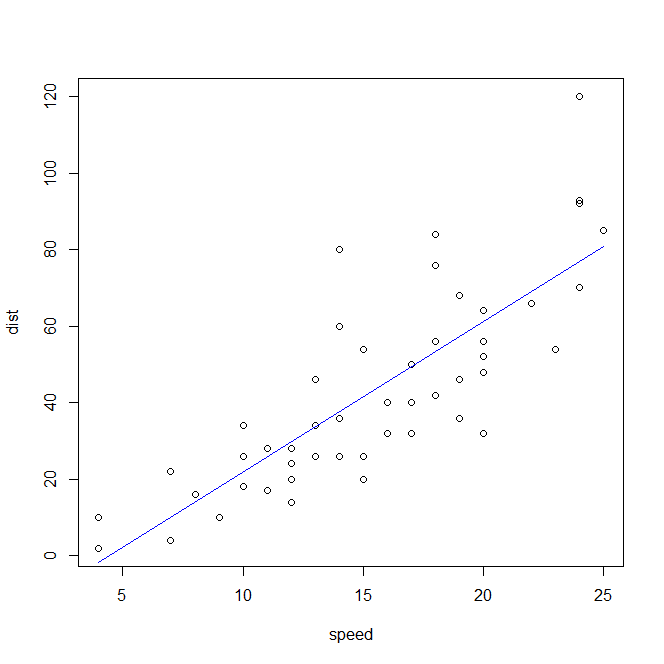 You can see that the result (blue regression line) is very similar to the one drawn by abline function (red regression line above), but not identical - the red line goes from the edge to edge of the plotting region, while the blue line goes only from minimum to maximum value of speed.

Benefit of the predict solution will become more apparent if we consider that maybe the relationship between the dependent and explanatory variable is not linear, and would be better done by curvilinear shape. For this, we can use poly function, included in the formula of lm model, which allows creating polynomial regression (ie y = b0 + b1*x + b2*x2 for polynomial of the second degree, allowing the curve to “bend” once).

The equation of this polynomial regression si then

To draw the predicted polynomial regression curve, we need to use predict (because abline can draw only straight lines), and additionally we need to define enough points within the curve to make the curvature smooth. 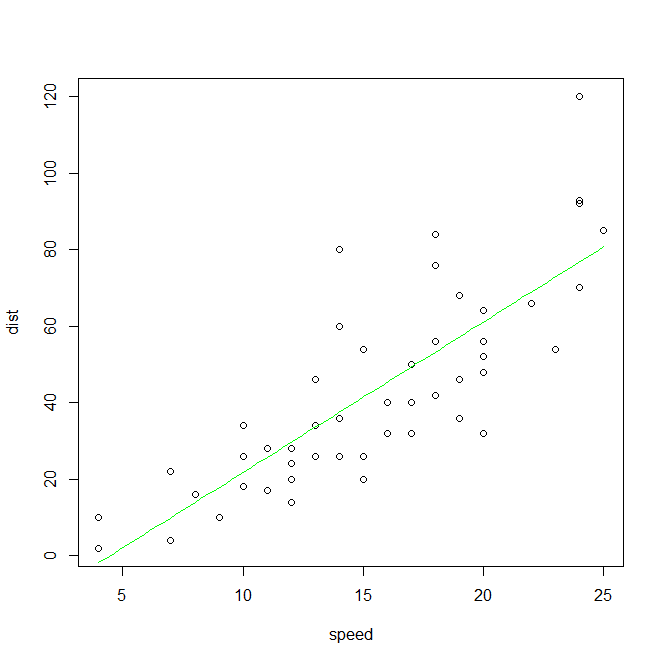 You see that the green line is practically straight - in fact, the pattern is very close to linear, so even if we fit the polynomial curve, it will be almost straight.

Finally, we can report the statistical values of the linear regression as the legend inside the figure (this is suitable, however, only if there is enough space inside the drawing area). Let's do it for linear (but not polynomial) regression, and include parameters of the regression, r2, F-value and P-value: 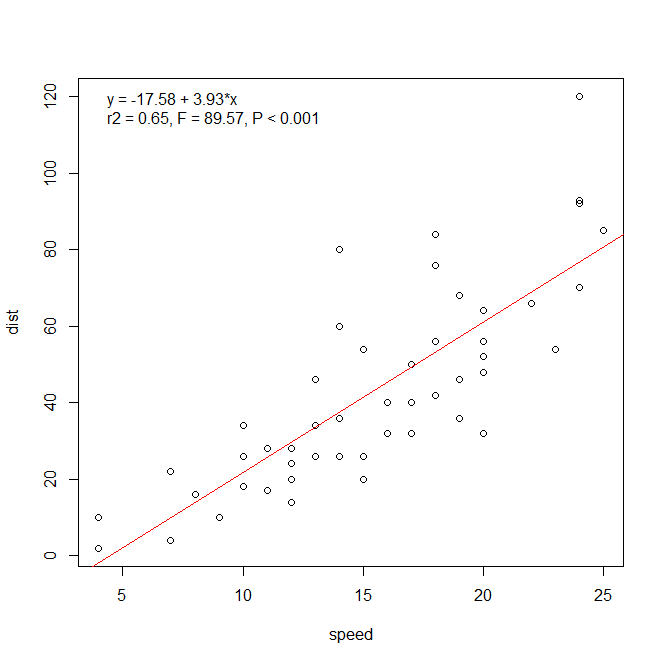