Here comes a brief introduction on how to run an R code in parallel on multiple cores. Depends, of course, whether your computer’s processor (CPU) has more than one core (here you can find how to figure out the number of cores on Windows).

If we stick to using library (parallel), then the simplified description of the script looks like this:

Let's demonstrate the parallelization on the example of a function which generates a large number (106) of random values from the normal distribution and then calculates their mean; this is replicated many times (100 times here).

Both functions return the list where each item is the mean value (all are close to zero since this is mean of the normal distribution with zero mean and unit standard deviation).

What is happening at the computer if you run lapply vs parLapply solution? For this, I had a looked into the Windows Task Manager, the folder Processes and Performance (you get there by right-clicking on the bottom toolbar of the Windows and choosing the option Task manager, see e.g. here). The lapply solution uses only part of the computer capacity - in my example, it is using ~ 39% of CPU, which (given that if I do any calculation the CPU runs on 10-15%) represents approximately one-fourth of the CPU capacity (my CPU has 4 cores, so it is like if it runs only on a single core, Figs 1a and 1b below). In case of parLapply the situation is different - first, four instances of R program are launched (which is possible to see in the Process window of the Task manager, Fig. 2a), and CPU is running on 100% of capacity, with each R instance running on roughly 25% (Fig. 2b). 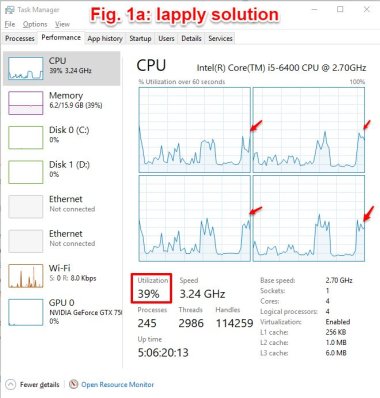 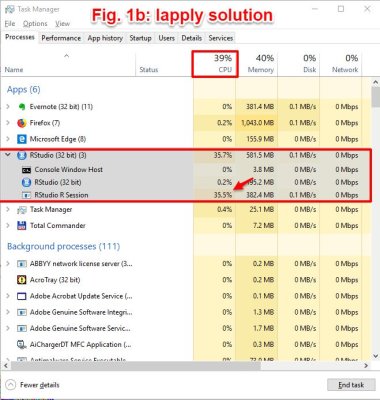 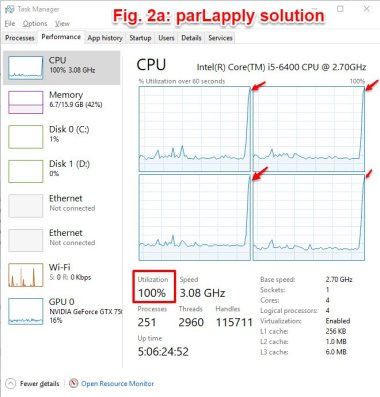 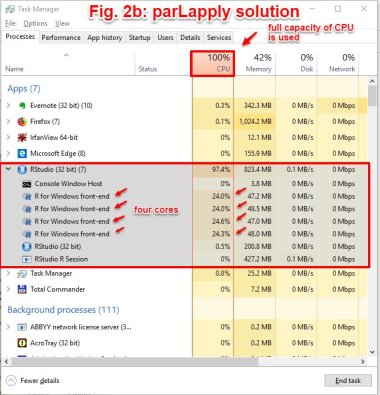 This makes the calculation considerably faster; result of benchmarking using function microbenchmark from library microbenchmark, show that the non-parallel version is in average 2.5 times slower than parallel (column mean, 7.56 sec vs 2.95 sec; note that I modified argument times in microbenchmark function to only 10 (default is 100), which means that the function repeats each version 10-times and calculates the time statistics):

The reason why the parallel version is not truly four times faster than non-parallel version (although it is running on four cores in the case of my computer) is that parallel processes spend some time overhead by managing the parallelization - splitting the data, sending them to individual R workers, collecting them and merging them together. The best use of parallelization is when a single operation takes considerable time, so the time spent by calculation is much higher than time spent by communication of R with individual cores. Indeed, if I increase the number of random values from which the mean is calculated from 106 to 107, the relative speed of parallel version increases to almost four (83.8 sec non-parallel vs 21.5 sec parallel)(do not try to run the code below unless you have a fairly powerful computer, since the calculation already takes some time; and note that I decreased the times = 5, otherwise it takes ages):